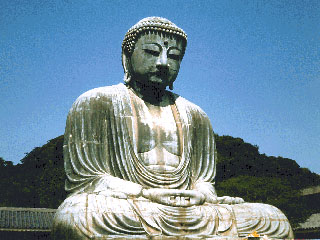 The name Buddhism comes from the word "budhi" which means "to wake up." This philosophy originated in the experience of a man named Siddhata Guatama(Buddha) nearly 2500 years ago in northern India.Buddhism has been compared to the 16th Century Protestant Reformation in that it was an offshoot of Vedantic Hinduism. While there are many forms of Buddhism collectively they are made up of nearly 350 million adherents worldwide (1.8 million in America in 1995 according to the Encyclopedia Britannica 1999 ed.). "Buddhism seems to have arrived in America sometime in the 19th Century. Emerson and Thoreau were touched by it. According to Peter Matthiessen, the first Zen master known in America arrived in the 1890s, and shortly afterward, D. T. Suzuki began a long career of translating texts and writing about Buddhism. Buddhism arrived in this country a second time after a wave of Tibetan lamas (driven out by the Chinese invasion of 1956) arrived in America the 1970s, set up schools and publishing houses, and began teaching on a wide scale."

While Buddhism teaches morals such as avoiding killing any creature, stealing, adultery, lying, corrupt speech, freed, anger and ignorance it is rooted in the teaching of a man who never claimed to be God (or a god) nor did he claim to be a prophet of God.The question that remains to be answered for 2500 years is "if a man is uncertain of his future can he be trusted with your future?"Buddha was quite uncertain about where he would go when he died and his remains can still be found in Kusinara at the foot of the Himalayan Mountains while in contrast Jesus Christ defeated the grave and can be found in heaven and in your life!

II). What does Buddhism teach?

3 Basic Laws (Signata)- these are declared to be characteristic of all compounded things.

ØImpermanence (anicca)- everything changes.Nothing is permanent.

ØUnsatisfactoriness (dukkha)- there is no goodness or beauty.

ØInsubstantiality (anatta)- there is no permanent essence, self or soul (in contrast to the Hindu concept of the soul "atman."

4 Noble Truths- these are the key to human perfection.

Ø1). There is pain and suffering in life. To exist means there will be suffering, birth is painful and so is death

Ø2). Suffering is caused by desire, craving or lust.

Ø3). Freedom from suffering comes when a person rids himself of all desires. "Enlightened people do not cease to experience the pain of existence. They only stop creating illusions that amplify that pain and cause new suffering"

Ø4). The way out of suffering is through the 8-fold Path.This path is adesigned to develop habits that release one from the suffering caused by ignorance and craving.

This concept of salvation is simply "works-salvation" contrary to "For by grace are ye saved through faith; and that not of yourselves: it is the gift of God: Not of works, lest any man should boast." (Ephesians 2:8-9 KJV). On Buddha's deathbed his followers asked who they should follow next and he replied "Be ye a lamp (or island) unto yourselves; work out your own salvation with diligence."

B). Karma, Samsara and Nirvana

Karma refers to the law of cause and effect in a person's life.This concept was originated in Hinduism and yet Buddha altered his idea of Karma in that you are what you are in the next life based on what you do in this life until you reach the state of Nirvana breaking the cycle of birth and rebirth.Hinduism supports a caste system in that you cannot progress from one rank to the next.

Samsara is the idea that only feelings, impressions, and the karma that is passed on goes through the birth and rebirth cycle.Buddha did not believe in the soul or permanence thus there is no self to carry into the cycle of life. The new life is similar, but not the same person.

Nirvana is the "blowing out" of existence. It is an eternal state of being where karma and the life cycle stop.It is a place where desire and individual consciousness ends.Buddha described it as "a condition, where there is neither earth nor water, neither air nor light, neither limitless space, nor limitless time, neither any kind of being, neither ideation nor non-ideation, neither this world nor that world. There is neither arising nor passing-away, nor dying, neither caused nor effect, neither change nor standstill."(Taylor and Offner, The World's Religions, GrandRapids: InterVarsity, 1975, p177).

The regular practice of meditation is used to cultivate calm and tranquility and to cultivate insight.The "lotus position" is used which is the classic yoga stance and begins with emphasis on concentration in breathing, then body, then mind through the 3 Basic Laws and the 1st two parts of the 8-fold path.

ØBuddha was not certain of his or your future.

ØBuddha did not teach a personal God.
"and ye shall bear the sins of your idols: and ye shall know that I am the Lord GOD." (Ezek 23:49 KJV)

ØBuddha always said "come and see.
rather than belief by faith, however, when he died no one could "come and see" but had to put their faith in him.Jesus came and said to believe by faith and then He rose from the dead for all to "come and see"!

"Therefore being justified by faith, we have peace with God through our Lord Jesus Christ:" (Rom 5:1 KJV)