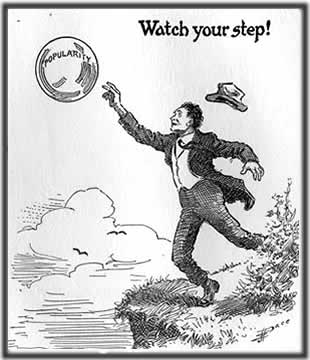 The world is looking for the broad-minded religious leaders according to men of standing and influence in church circles. The happiest thing to be said of any man, especially a preacher, is that he is broad-minded. A tolerance that says we are all right is the proper and popular attitude to take toward the religion of other men. The only thing demanded of men is sincerity. It does not make a particle of difference what a man believes if he is only sincere. Let's put our arms around each others' shoulders and whisper "Brother!

Tolerance - Brotherhood - Broad-mindedness - are the mystic words and ingredients that will solve the world's problems. You are almost led to think God has had problems that have waited on this day and these words. To be narrow is the serious sin. To be broad is the greatest grace.

No doubt there is such a thing as a narrow mind but there are plenty of people who are priding themselves on a broad mind who only have a flabby backbone. You must make a distinction between a broad mind and a flat one. Some men are proud of what they do not believe. Mrs. Browning once said, "Entire intellectual toleration is the mark of those who believe nothing."

There is a letter in the New Testament written to a broad-minded church. This is what it says: "Because thou art lukewarm I will spew thee out of my mouth." I guess lukewarm means indefinite- "neither cold or hot." That church would stand for a little bit of anything. If some man preached the gospel, well. If some "good mixer" preached something else no one objected. They were not red hot with zeal for God. Neither had they taken up arms against the truth. They were indefinite, broad-minded.

I have a complaint to make. This government will not allow me to manufacture money. It is not because mine would not be as well made as theirs. They refuse to give me a reason. They just won't allow me to do it. They seem to be very narrow on that subject. They say I am to use theirs or go without.

God will not allow me to make a religion. He says I am to use His or go without. When you buy a yard of cotton in one state you get thirty-six inches just as you do in any other state. Four quarts make a gallon in Ohio, California, and all other states. This is not a coincidence. There is a standard of measurement.

God has a standard of measurement. One day He held the entire human race up to the measuring stick and said, "All have sinned and come short." There are some people so narrow they think there is only one way to spell cat. They would object if even a very sincere person spelled it K-A-T. Something more than sincerity seems to be needed to spell correctly. I have read of the "religion of the inarticulate." It is time for someone to write on the spelling of the honest hearted. Why is there a dictionary? Only that there might be a standard in spelling. Why a Bible? Only that there might be a standard in religion.

Religion is the only realm where everyone is right and no one is wrong. Who dares to accuse "science" of being narrow in her positives? The answer to the problem in mathematics is never different and never questioned. But in religion the wiser you are the more you will doubt.

Some men have tied knots in logic in an attempt to prove Christ broad-minded in the accepted sense of the term. They remember that Jesus rebuked the disciples for being jealous of some, who cast out demons in Christ's name. But you must remember, they did it the casting out in His name. May I remind you of the time He sent out the twelve and said, "Go not into the way of the Gentiles, and into any city of the Samaritans enter ye not: but go rather to the lost sheep of the house of Israel." That does not sound very broad. Of course you can get rid of that scripture by doubting its authenticity. That is a very convenient way to get rid of troublesome sections of the Word.

The Apostle John tells of a conversation Jesus had with a Samaritan woman at the well. In that conversation He said, "Ye worship ye know not what: we know what we worship; for salvation is of the Jews." One came to Him for help. He gave the needed aid but said, "I am not sent but unto the lost sheep of tIre house of Israel." You will have a hard time proving Jesus tolerant. If you believe Jesus had authority to speak for God you must believe God has a Door, and a Way, and a Plan. It is for the preacher to be as broad as that Door and that Way - and no broader.

God has always had a plan. When Jesus said, "Go only to the lost sheep of the house of Israel," He was following the plan. Some time after Pentecost came another step in the Divine Plan and the door was thrown open to both Jew and Gentile. The gospel of grace was given to the whole world. The gospel was given. It was not another step in the evolution of religion. The gospel is a revelation not an evolution. It was not built up by man - it was handed down by God.

The gospel is not brotherhood or tolerance or education. All the way from the Garden of Eden to the present the same religion has been proclaimed by the messenger of God - Atonement by substitution. Read it in typical acts, events and persons. The entire Bible from Genesis to Revelation points to the Man of the Cross. We are saved from our sin and brought into fellowship with the Father by believing in Him. This is the only original and genuine religion. All others are imitations, substitutes, and counterfeits.