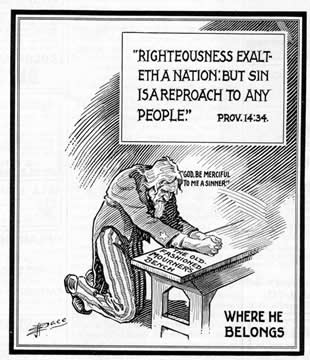 AMERICA'S greatest sin and the real cause of the present depression is forgetting God. That means failure to obey God, to listen to His Word, and to bring up our children in the nurture and admonition of the Lord. Godlessness leads to disregard for law, corruption in politics, fraud in educational and state life, and hypocrisy in the Church.

Though there are fifty million church members in the nation and many more Christians who are not church members, yet there are about seventy million outside the churches, living as if there were no God or hereafter.

America's History Has Been Phenomenal

From the first there were many immigrants coming to America seeking religious liberty. In godly worship they settled our eastern shores, then moved westward, until they settled almost three million square miles of territory. They built cities, made marvelous inventions, improved everything possible, and now support approximately 124,000,000! For 157 years, God has been the God of this nation, piloting us safely through the pioneer periods, the five wars for freedom of oppressed peoples; and as a culmination, the people following the recent period of prosperity, have turned largely away from God! Then came the events which brought a general depression!

How Does America Forget God?

By largely banishing the Bible from schools and by misinterpreting it in universities, criticizing it in theological seminaries and colleges, and scoffing at it among the infidels and atheists of the nation. False cults numbering nearly ten million are sweeping the land with propaganda of denial, deceit and devilish doctrines. Atheists, modernists and communists have formed a deadly alliance against God, Christ, the Church, and the Bible. "But he that sitteth in the heavens shall laugh, the Lord shalt have them in derision."

Pleasure, newspapers, magazines, business and society have largely taken the pre-eminent place that God and Christian living ought to take. Crime gets the eye, not Christ! Society not salvation, business and not betterment of souls, money and not missions, earth and not Heaven is foremost in thinking. True, there are a few million Christians in America who still adore, worship and serve Him; but they are like salt in a rotting nation.

Ancient Babylon, Greece, Rome, Medo-Persia, Assyria, and other empires all forgot God, and have been ruined and forgotten; but only until the judgment!

Oh, citizens of America! Will you ever learn a lesson from past history, from experienced adversity, from former judgments on the nations, that forgetting God does not pay? Can the professing Church of today continue to exist if she joins the world, praises the communists and denies God's divine rulership?

Macaulay, the English historian, writing nearly one hundred years ago, said of America, "She will be pillaged and looted in the twentieth century by vandals, and forces within her will cause her destruction." Indications prove him to be right, and unless something can be done by godly people to stem the tide of lawlessness, communism, modernism and immorality, she will go the way of the ancient nations. Will Christians, will governmental leaders, will its citizens awaken in time or too late?

What Will Cause America to Return to God?

Only a nation-wide revival of Christian teaching, the preaching of a crucified Christ, the return to the Bible, banishing communism, deposing false cult-teachings, baring worldly and sinful amusements, and all dangerous teachings in our public schools. God must find His rightful place in human hearts, the family altars must be restored, and the Church must cease pandering to worldly aspirations.

The prodigal son "came to himself," and America must come to herself. God's voice calls upon her to repent, confess her sins and return to the God of love and life. Mercy pleads with justice, grace pleads against judgment, truth opposes falsity, and wisdom foresees coming disaster, unless there is a change through national revival.

May God's faithful ones keep crying to God for a revival and "give him no rest" until He hear from Heaven with a mighty power as of old. Let us pay unceasingly, "Wilt thou not revive us again, that thy people may rejoice in thee?" (Ps. 85:6)