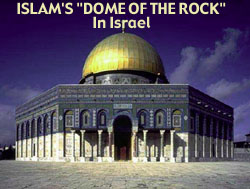 
Islam is a religion that claims to be the culmination of Judaism and Christianity that began with the patriarch Abraham through his son Ishmael. It claims to have been completed by the prophet Muhammad in the early 7th century as was revealed to him by the angel Gabriel and recorded in the Koran (Quran). Islam claims 1/5 of the world's population or approximately 1 billion followers worldwide (5 million in America).

I. Who Was Muhammad?

ØParents died at an early age and he was raised by his uncle of the tribe of Quraysh: "the most powerful and prominent tribe in all of Arabia in the Prophet's era. The Quraysh were the keepers of the Ka'bah and therefore one of the wealthiest and most powerful tribes.

ØAt age 40 the angel Gabriel appeared to him in a vision giving him the revelation of the Quran over the next 23 years.

ØSome years later he returned to Makkah to forgive his enemies and establish Islam, dying at age 63.

The 5 Pillars: "are the framework of the Muslim life: faith, prayer, concern for the needy, self-purification, and the pilgrimage to Makkah for those who are able."

1) Faith: This declaration of faith is called the Shahada, a simple formula which all the faithful pronounce."There is no god, but Allah and Muhammad is his messenger"

2) Prayer:Salat is the name for the obligatory prayers which are performed five times a day, and are a direct link between the worshipper and God. These five prayers contain verses from the Quran, and are said in Arabic, the language of the Revelation, but personal supplication can be offered in one's own language. Prayers are said at dawn, noon, mid-afternoon, sunset and nightfall, and thus determine the rhythm of the entire day

3) Alms Giving: The word zakat means both 'purification' and 'growth'. Our possessions are purified by setting aside a proportion for those in need, and, like the pruning of plants, this cutting back balances and encourages new growth. Each Muslim calculates his or her own zakat individually. For most purposes this involves the payment each year of two and a half percent of one's capital.

4) The Fast: is regarded principally as a method of self purification. By cutting oneself off from worldly comforts, even for a short time, a fasting person gains true sympathy with those who go hungry as well as growth in one's spiritual life.

5) Pilgrimage: The annual pilgrimage to Makkah - the Hajj - is an obligation only for those who are physically and financially able to perform it. Nevertheless, about two million people go to Makkah each year. The annual Hajj begins in the twelfth month of the Islamic year (which is lunar, not solar, so that Hajj and Ramadan fall sometimes in summer, sometimes in winter). Pilgrims wear special clothes: simple garments which strip away distinctions of class and culture, so that all stand equal before God. The rites of the Hajj, which are of Abrahamic origin, include circling the Ka'ba seven times, and going seven times between the mountains of Safa and Marwa as did Hagar during her search for water. Then the pilgrims stand together on the wide plain of Arafa and join in prayers for God's forgiveness, in what is often thought of as a preview of the Last Judgment.

III. What So Wrong With Islam?

1) Islam follows the WRONG gospel! Muhammad claims to follow the teaching of Abraham through Ishmael when the Bible said that God would bless all nations through Isaac's seed not Ishmael and that seed would be in CHRIST!

"But my covenant will I establish with Isaac, which Sarah shall bear unto thee at this set time in the next year." (Gen 17:21 KJV)

Jesus is not the Son of God.

Jesus did not die for our sins.

Jesus was not crucified.

Jesus was not divine as well as human.

Jesus is not the Saviour.

3) Muhammad was a sinner! Many Muslims believe that he was sinless however he said himself:

4) Muhammad was not sure if he was going to heaven himself: The Prophet said, "By Allah, though I am the Apostle of Allah, yet I do not know what Allah will do to me." (Hadith vol. 5, no. 266)

6) Islam uses Jihad (holy war) to force religion. The Hadith (another "holy" book of Islam) says that Jihad, or holy war, is the second best thing to believing in Allah and his apostle (Muhammad). Allah's apostle was asked, "What is the best deed?" He replied, "To believe in Allah and his Apostle." The questioner then asked, "What is the next?" He replied, "To participate in Jihad in Allah's cause." (Hadith vol. 1, no. 25).

7) The Quran requires violence. Sura 9:5 says, "Fight and slay the pagans wherever ye find them, and seize them, beleaguer them, and lie in wait for them in every strategem of war." Sura 5:33 records what is done to infidels who resist Islam: "Their punishment is...execution, or crucifixion, or the cutting off of hands and feet from the opposite sides, or exile from the land." Muhammad also burned out eyes with hot irons (Hadith vol. 1, no. 234) and deprived people of water until they died (vol. 8, no. 796).

8) Women are treated bad in Islam. Let's look at the Quran, Sura 4:34: "Men are the managers of the affairs of women...Those you fear may be rebellious--admonish; banish them to their couches and beat them."